Behold the Power of Graitch

At the risk of understatement, Graitch is the greatest thing ever created. It could stop wars, make pretty girls go with ugly guys, and possibly bring back Mr. Hooper.

To make Graitch you take a package of grape jello and a package of peach. The ingredients are exactly the same, so there is no need to buy the name-brand. You boil the water, and add two cups of boiling water to the peach and grape packets. Stir with a whisk really thoroughly. Once it’s stirred in let it sit for a bit. Take some new ginger ale (cold is better), and pour it in. Or, you can do one and one half cups ginger ale and half cup cranberry juice or something. Anyway, stir in the ginger ale really well two, but quickly, as the bubbles won’t last forever.

Before you do all this you need to prepare your fruit. Mangoes are always a good go-to, but just don’t get too ripe, or it won’t work (at least 2 of them). You want a bit of bite and tang. In season nectarines rule, and blueberries in season are to die for. Whatever you do, do not use frozen fruit, as that doesn’t work at all. Before your foam dissipates, pour your jello in the final container, and put the fruit in, moving it around with the whisk so it’s easily distributed.

Then you wait. The label says four hours, but with all that fruit, it might take up to six. But it’s worth it. The Graitch has this fizz in your mouth, like you’re eating pop-rocks. Along with the tang of the fruit and the sweetness of the jello…to die for. 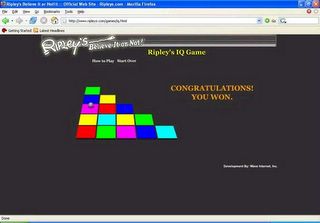 I did it again. My powers are growing
Dropped by Hyperion at 5:16 AM No comments:
Email ThisBlogThis!Share to TwitterShare to FacebookShare to Pinterest 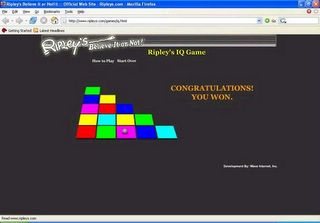 proof that I did it
Dropped by Hyperion at 1:06 PM No comments:
Email ThisBlogThis!Share to TwitterShare to FacebookShare to Pinterest

I ran across this site today: Ripley's IQ Test

It seems easy, like those peg games you used to play as a kid (or if you're my brother, you still do), but with the configuration of a Right Triangle, the games is a bit more tricky.

It took me about 7 or 8 tries to get down to 2, and after that 2 seemed remarkably easy. I faltered a bit, but after about 20 tries I finally got it down to 1. See how you do. As proof, I offer the screenshot, which should be above this. If you want to prove you did it, press "Alt + Print Screen/SysRq" button. That will "capture" what you have on screen, and then paste it in an email and send it to me at hyperionchronicles@shaw.ca
Dropped by Hyperion at 12:58 PM No comments:
Email ThisBlogThis!Share to TwitterShare to FacebookShare to Pinterest

I ran across this just now, and it totally cracked me up. They took Romance novel covers and re-did the titles. I would put the link in a potpourri column, but there is no way I could get away with it (especially the second page).

However, anyone who comes to this site can handle it. Leave a comment about which one is your favorite

http://www.worldoflongmire.com/features/romance_novels/readers_covers.htm
Dropped by Hyperion at 7:06 AM No comments:
Email ThisBlogThis!Share to TwitterShare to FacebookShare to Pinterest

BURNING QUESTIONS OF THE DAY

Dropped by Hyperion at 11:49 AM No comments:
Email ThisBlogThis!Share to TwitterShare to FacebookShare to Pinterest

The search for that which does not suck

I’m wondering if this ever happens to other people. You’re watching TV and there is really nothing good on. You flip around and flip around, and you keep forgetting that your usual channels have crap, so that each time you go back to them you’re like, “Oh, yeah: that sucks.” You know you should be doing something else, like ideally going to sleep, or at least redeeming the time. But you don’t. You see the same stories on Headline News or Sportscenter and you realize the half hours just keep rolling by. And still you don’t get up.

And then, at some point, perhaps to justify your sitting there, you no longer are simply wasting time, but your flipping becomes, like, a holy quest to find something good. You don’t even really need to watch it. You just need to find it. Once you do find it you can get up and move, with the knowledge that by skipping said good thing, you’re being strong.

But it’s hard. So you reach. You go to channels you usually skip. You give shows a try you’d normally never watch in a million years. This is how I kept watching V on the Space channel. I remember V back in grade school. It was some miniseries about alien invasion. I was not allowed to watch it, but Russell Page and Kelii Lycett would talk about it each morning at school. Then I guess the made it into a TV show.

It was pretty bad. I couldn’t tell if some of the people were aliens or not. They didn’t look like aliens, but nobody looked like aliens, and someone had to be them, so I’m guessing that the aliens pretend to look like humans, which is pretty convenient from a central casting perspective. The best part was Willie, this guy who agreed to have a baby (further evidence that perhaps he’s not human). I wasn’t sure until I looked it up just now, but I thought Willie was played by Robert Englund, who would later go on to be Freddy Krueger.

So V wasn’t cutting it. I kept going back to this Canadian drama. Now, for those of you in the , you don’t know that Canadian drama is synonymous with “so-bad-that-you-pray-for-the-rapture.” The production values would make the network scoff, and that’s a feat in and of itself.

The problem is that there is very little money to make shows. They have this pool of money called CanFund, and all the shows have to share. They don’t really have a up here, since all the Canadian talent heads to the States as soon as they make it.

It’s not like there aren’t a lot of Canadian actors who’ve made it down there. I have found out there are a surprising number of them. And believe me: you quickly learn who they are, because apparently to be Canadian it’s the law that you must know all the Canadian celebrities.

I can’t tell you how many times I’ll be in some random conversation and actor X will come up, only to hear my Canadian comrade say, “Oh, he’s Canadian.” I’m never sure how to respond to that. If the actor is your brother, that’s pretty interesting. Even if you went to high school with him, that could be kind of cool. But just to point out that he’s Canadian? I feel like saying, “Yeah, well Celine Dion is Canadian too, so I don’t think you want to go down that road.”

The other thing that makes most Canadian dramas pretty terrible is that they are trying so earnestly to show they are Canadian. This usually leads to awkwardness and totally random references. It’s bizarre.

So anyway, I get to this program, and have no idea what it is. I keep flipping back to the listings channel, but I keep missing Channel 23. Don’t you hate when you do that? Then you have to wait for them to get all the way back to that one. Eventually I get it right and the show is “Nothing too Good for A Cowboy.”

It’s really bad, so I’m assuming it’s Canadian, but it’s kind of sweet anyway, and the girl is what’s-her-name from SCRUBS. I’m guessing it’s supposed to be the late 1800s, except everyone is very clean. But what do you expect?

The SCRUBS girl is living with five guys, in a one room cabin. This isn’t some Christina Aguilera situation, though, it’s because times were hard in the old Canadian west, and building extra rooms cost money. Eventually I figure out she’s married to one of the guys, because he’s shirtless in bed with her. Would a man be shirtless in bed back then? I doubt it. And, one of the “hands” on their farm is actually a girl, pretending to be a guy. One of the subplots her trying to keep it secret. When they actually find out the husband dude is most upset because Kit, I think her name was, is only 14, and not 16, the age when you’re legally allowed to leave home, at least in the Canadian west. Another part of that subplot is that this one cowhand is positive she’s a girl, and he keeps trying to stare down her shirt to see her breasts.

I was once a 16 year old boy, and I can’t really fault him for doing everything in his power to discover the truth of her identity, and more importantly, discover 14 year old breasts. Eventually he peeks down her blanket when she’s sleeping, and she threatens (very loudly, for being in the one room with everyone else) to kill him if he tells. The guy agrees, but from then on he acts all weird, trying to help her lift fence rails, which just causes more problems, and yelling at the other guys for swearing, because, “ a true cowboy speaks with uncommon courtesy!”

I don’t know if that’s true, or even what it means, but it was enough for me. I’d found my show, my quote, and something else to do: come down here and write about it.

Dropped by Hyperion at 11:25 AM No comments:
Email ThisBlogThis!Share to TwitterShare to FacebookShare to Pinterest
Labels: TV
Newer Posts Older Posts Home
Subscribe to: Posts (Atom) 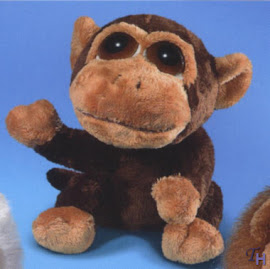